Penicillin was discovered 90 years ago – and despite resistance, the future looks good for antibiotics

Written by Alastair Hay. First published in The Conversation, 6 September 2018.

When the NHS turned 70 this year, I was reminded of another anniversary which has had an enormous impact on healthcare over many years. Penicillin is 90 this year.

Discovered in September 1928 by Alexander Fleming, it was first used as a cure when George Paine treated eye infections with it in 1930. A method for mass production was devised by Howard Florey and Ernst Chain in 1940, and it was first mass produced in 1942, with half of that total supply used for one patient being treated for streptococcal septicaemia.

In 1944, 2.3m doses were produced in time for the Normandy landings of World War II. And it was then that the miracle of penicillin became clear. Soldiers who had previously died from septicaemia were surviving.

Expectations rose. If penicillin could cure septicaemia, what about other serious infections like meningitis, pneumonia and kidney infections? Of course, we should use it for these, too. And what about nasty chest infections and troublesome sinusitis? Or inconvenient sore throats which could affect wedding days or job interviews – should these be treated with penicillin?

It seems (and for good reason) that we all wanted to be part of the 20th-century miracle that was penicillin. Patients didn’t want to be patients and doctors wanted to cure – why else did we come into medicine?

So antibiotic use grew and grew – and grew. Today, tens of millions of prescriptions are written in the UK every year, mostly by GPs and nurses in primary care.

But all is not well. Fleming was aware of the problem as soon as he discovered penicillin. Most bacteria were killed by the medicine, but others were immune, somehow able to resist the miracle.

And here is the paradox – in contrast to most medicines, the more we use antibiotics, the less effective they become. It’s because the bacteria multiply so rapidly – some every 20 minutes. If any one of the bacteria happens to survive antibiotic treatment, so do all of their offspring. And the antibiotic gives an immediate survival advantage to the resistant bacteria by indiscriminately destroying the competition.

The resistant bacteria affect us – our infections and hospital admissions last longer and are more expensive to treat. Over 25,000 people die every year from antibiotic-resistant infections in the UK and Europe.

But there is hope. There has been a massive, coordinated effort by the UK government, chief medical officers, NHS policy makers, NICE, the pharmaceutical industry, GPs, nurses, patients and academics. And we are making progress. We have just witnessed the first reduction (over 5%) in antibiotic prescribing in primary care for several years.

As a GP and professor of primary care who has observed the problem of antimicrobial resistance for over 20 years, I am optimistic about the future. More of my patients have heard about antibiotic resistance and seem to take it seriously. We all want to steward this precious resource for the next generation and I believe we will rise to the challenge. 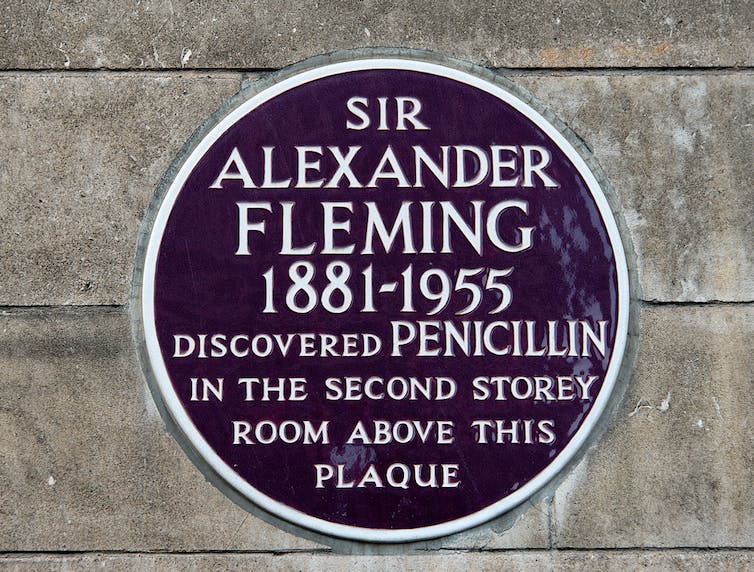 A plaque at St Mary’s Hospital in London. Shutterstock

At the University of Bristol’s Centre for Academic Primary Care Infection Group, we continue to ask the big questions: why do some people experience lots of infections and others very few? How can we protect ourselves from acquiring infections in the first place? And are there effective alternatives to antibiotics?

Through our research we already know that patients don’t necessarily want antibiotics – but they do want to know how best to manage infection symptoms. We’ve learned that even one course of antibiotics increases the chance that a patient in primary care will subsequently have resistant bacteria. We known that many infections last longer than we think, and knowing this can help us be more realistic about what to expect. And we discovered that ibuprofen is superior to paracetamol for relieving fever in children, and both alternated are superior to either alone.

Together with colleagues from across the world, our collective effort to answer the big questions will help patients, doctors, nurses and the NHS achieve the goal of effective antibiotic use. In this way, patients can continue to benefit from the miracle treatment that Fleming first discovered 90 years ago. So here’s to another 70 years of the NHS – and another 90 of effective antibiotics.