In 2016 the Cochrane Tobacco Addiction Group carried out a priority setting project (CTAG taps), funded by the NIHR School for Primary Care Research. Drawing on the opinions and experiences of members of the public, health professionals, healthcare commissioners, researchers, guideline developers and funders a clear message emerged- that there are still many unanswered research questions in the areas of tobacco use prevention, harm reduction and cessation. Now the NIHR have put out a large funding call, across a number of its funding streams, for research in these areas. The NIHR cite the findings of CTAG taps as a clear driver for this call. CTAG taps resulted in eight tobacco related priority research categories, with corresponding questions, and four overarching priority themes.

The NIHR have drawn on these outputs and discussed them with their stakeholders to come up with a commissioning brief for researchers who would like to apply to the funding call. They are particularly interested in research projects in the following areas:

The Cochrane Tobacco Addiction Group are delighted to see the results of their priority setting project used in this way. Dr Nicola Lindson (University of Oxford), Managing Editor for the group and lead investigator on CTAG taps, said ‘One of the goals of the exercise was to set our own priorities for coming years; but we were hopeful that we could disseminate the results widely enough that the wider community would also benefit. It is great to see that we achieved this. We really hope that it will drive much needed research and ultimately contribute to public health’. 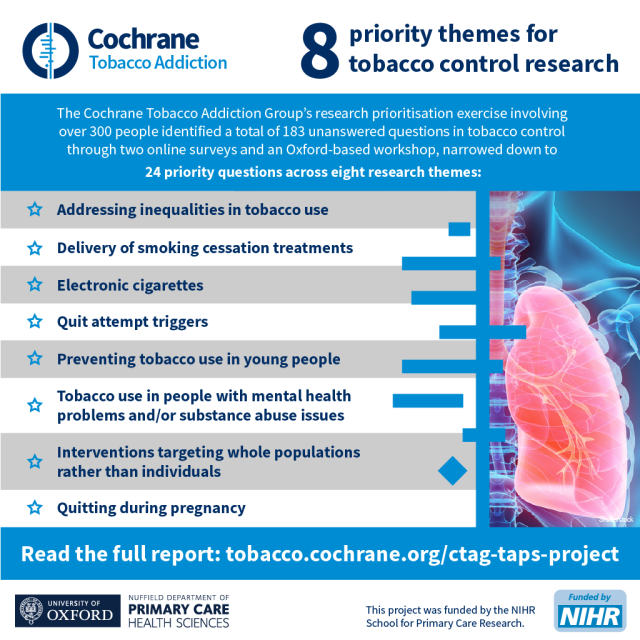