Who would have thought that 2020 would be so different? Like many elements in life, research and patient and public involvement (PPI) have also been affected by the COVID-19 pandemic. The usual in person involvement meetings with cake, tea and socializing are not feasible now. Being a vital element of the NIHR School for Primary Care Research (SPCR)’s funded research, involvement meetings had to move online in order to continue. But back in March, many were unfamiliar with virtual meetings and I am sure I’m not the only one who had never heard of Zoom before COVID-19. How could the SPCR support their research community in conducting their PPI online?

In the early days of the pandemic, many organisations started to publish guides, (grey) literature and webpages and in May (which was when I stopped counting) there were well over 50 unique documents and webpages! The School compiled some of these in an FAQ page to support the navigation of all the resources. To support public contributors, the School created “how to use” guides for MS Teams and Zoom and collaborated with NIHR Oxford BRC and NIHR ARC Oxford and Thames Valley to create an infographic, all aiming to make the software and method of virtual meetings less alien.

Not only meetings have moved online, so has training. With training moving online, new possibilities open up. Not only can people join in from anywhere, it is also easier for organisations to collaborate on developing and delivering the training. In the summer, the opportunity came along to collaborate with the NIHR Academy to develop a webinar on holding PPI meetings virtually. The session became part of both the SPCR 6-month training programme “SPCR online research skills: Growing the network, developing the capability” and the Academy’s webinar series. Working with my colleague at the Academy meant the training consisted of richer information, as it was the outcome of discussions amongst PPI professionals, instead derived from a single point of view.

Doing the training online allowed us to get additional presenters involved. Where it is less realistic to ask someone to travel for a 5-10 minute contribution to a training, without a commute it is less time consuming to contribute. As such, we were able to invite SPCR fellow Dr Beth Bareham and Ben Wills-Eve, a public contributor, to share their stories.

Almost 370 people joined us on the 23rd of October, with a majority of them being researchers. Imagine how many people would have been staring at me if we presented in person (and the logistics involved to allow this many people to get together)! I have been told the average show-up is 75% for such webinars, so the interest in training on holding PPI meetings virtually was clearly there. A recording of the webinar is freely available and this has attracted already almost 200 views. We hope the recording will be a lasting resource where researchers and involvement professionals can refer to. Just like with an online PPI meeting, the online format allowed us to reach more people, who hopefully gained skills and confidence in conducting PPI virtually.

The NIHR remains committed to patient and public involvement during the pandemic. In various ways the SPCR has tried to support researchers and as Beth indicated during the webinar it might seem a bit daunting to move PPI meetings online, but it can still work and be valuable to research. If you have any further suggestions on how the SPCR can support researchers, do let us know. 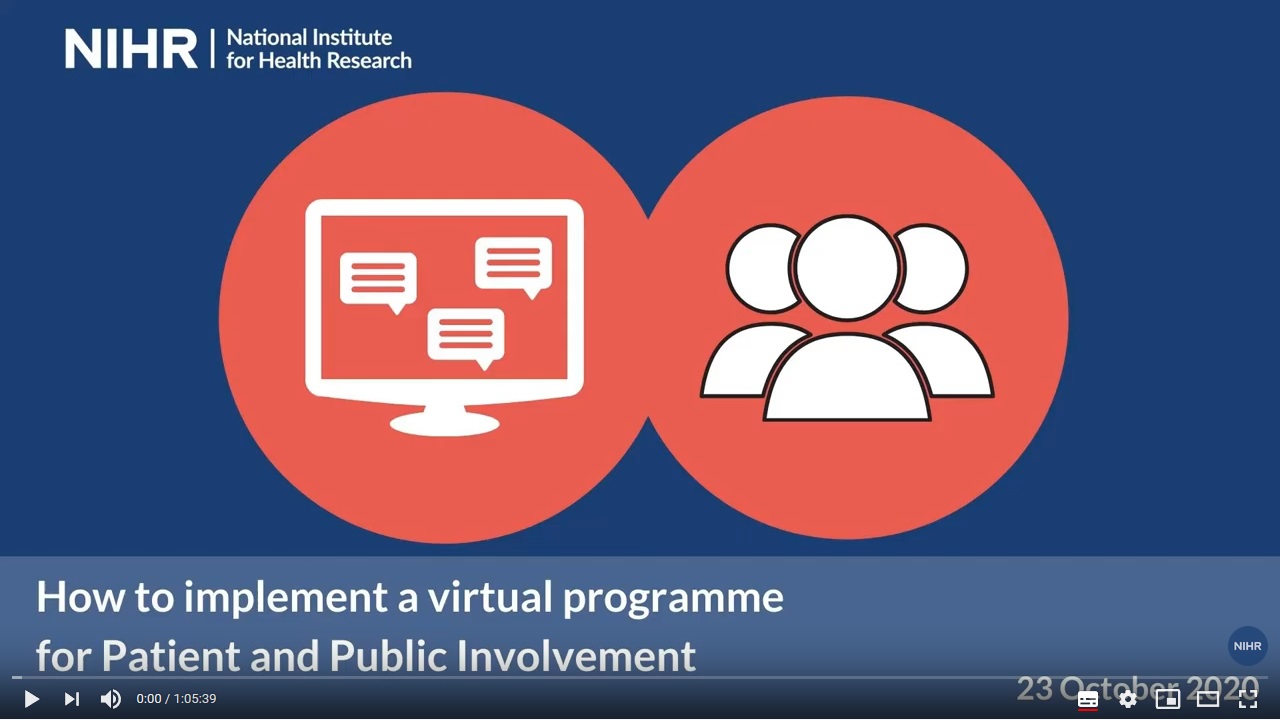